Politics and the Financial Crisis Slow the Drive to Privatize 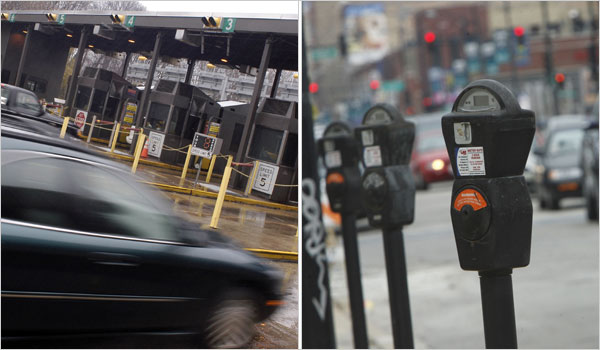 New York Times
June 4, 2009 It was hailed as a win-win for Main Street and Wall Street — a way for states and cities, along with financiers, to make some money.

But now privatization, the selling of public airports, bridges, roads and the like to private investors, looks like a boom that wasn’t. Deals are collapsing. Airy hopes of quick profits are vanishing. And what was celebrated as a new wave in finance is, for the moment, barely making a ripple.

What happened? The financial crisis, for starters. The easy money that Wall Street was counting on to finance its purchases has largely disappeared. Then the Obama administration unintentionally damped interest with its $787 billion economic stimulus package, a windfall that local governments are now racing to spend.

Bankers concede they got a bit ahead of themselves. When times were good, investment banks and private investment funds raised billions of dollars in hopes of buying infrastructure. But many state and local governments resisted selling because of money, politics or both.

Some deals turned out to be less lucrative than these would-be sellers had hoped. Government officials also began questioning whether taxpayers would be better off if infrastructure were in private hands. After Chicago sold its parking system to a private operator, for instance, drivers had to feed meters with as many as 28 quarters to park for two hours.

“We will see a few transactions,” said Fred Pollock, a vice president at Morgan Stanley Infrastructure, a private equity fund. “But we know what we won’t see — a tidal wave of projects.”

Some big names still want to enter this business, among them Citigroup, Goldman Sachs, Morgan Stanley and Kohlberg Kravis Roberts. Such investors have raised about $180 billion for global infrastructure projects. Large funds have also been established in Australia, Britain and Bahrain, where such public-private partnerships are more common. More than 20 states enacted legislation in recent years to allow some form of private-sector investment that would help fill budget gaps and repair crumbling roads, bridges and even airports.

But now the deals are falling apart. In April, a much-anticipated $2.5 billion plan to privatize Midway Airport in Chicago collapsed after a group of investors was unable to obtain debt financing. The deal, which had been in the works for four years, was to have been the first in a Federal Aviation Administration project that would have allowed up to five major airports to move into private hands.

Midway was just the latest setback. The biggest was the failure last fall of the largest deal proposed to date — a $12.8 billion lease of the Pennsylvania Turnpike to an investor group headed by Citigroup and a Spanish investment firm. Postmortems into that failed effort show that privatization advocates vastly underestimated the political opposition the deal would stir up in the Pennsylvania legislature.

Late last month plans to privatize “Alligator Alley,” a 78-mile stretch of Florida highway that connects Fort Lauderdale with Naples, collapsed when no bidders showed up. The failure has had a ripple effect — in Mississippi, state officials have pushed back the bidding schedule for a new 12-mile toll road.

Then there is the $1.2 billion privatization of 36,000 parking meters in Chicago. In the five months since the deal took effect, widespread complaints about poor service and rising parking rates have created a political firestorm for the Chicago City Council. Public opposition was so strong that on Wednesday the council approved a delay in voting on any future asset sales.

Chicago public officials have called the work of the private operator, Chicago Parking Meters L.L.C., “simply unacceptable.” For its part, the operator has apologized and announced it would delay price increases at the meters.

Proponents of public-to-private asset sales point to the $1.8 billion lease of the 7.8-mile Chicago Skyway in 2004 and the $3.8 billion raised by Indiana through a 75-year lease of its toll road in 2006 as successful pioneering efforts.

In Indiana, the money went to pay for a 10-year highway infrastructure program, and Gov. Mitch Daniels was re-elected last year promoting the lease, despite bumper stickers that read “Keep the Toll Road, Lease Mitch.”

The stimulus money, as well as other infrastructure money promised by Congress, has provided temporary relief for cash-poor municipalities. But this situation will not last forever.

“They still have expenses, and revenues will not keep up,” Scott Pattison, executive director of the National Association of State Budget Officers, said of state and local governments. “Some states will have to look at asset sales and decide. Once we step back from this crisis mode, I think they will be looked at again.”

If the market revives, the problems that scuttled recent deals may provide some lessons. In the case of the Pennsylvania Turnpike, politics clearly played a role in the deal’s collapse. A study by the Pew Center on the States found that proponents of the deal had overpromised what the turnpike could fetch and had failed to make it clear where the money would go.

After indicating that the turnpike might be valued at as much as $26 billion, when the winning $12.8 billion bid came in lawmakers felt it looked too small. Even more, there was concern that the money would be squandered and that the state was putting a valuable asset into foreign hands, since the top bidder included a Spanish company.

“It simply wasn’t a sufficient bid by a long shot,” said Joseph F. Markosek, a state legislator and head of the Pennsylvania House Transportation Committee.

Similar sentiments are coming into play in Florida, where few had expected Alligator Alley to be leased. “I believe the private partnership is like fool’s gold,” said David Aronberg, a state senator in south Florida who has led the fight against privatization. “It only looks good from afar.”