Link to article here. The Director from the University of North Texas is rather clueless to what’s happening in his own state! The article claims “experts” have never heard of another existing interstate being converted to a toll road, but such a plan is alive and well all over the U.S., with Texas being ground zero.

Existing interstate I-35 is slated to be tolled from San Antonio to Dallas, along with portions of I-10 in Houston very soon with San Antonio to follow. Portions of state highways 121 in Dallas and 281 in San Antonio are also going to be converted if Governor Perry and his un-elected Transportation Commission have their way. A pilot program in the 2005 federal highway bill, SAFTEA-LU allows existing interstates to be tolled. The Texas Department of Transportation actually requested that Congress grant them the right to buy back (hence takeover) existing interstates in Texas so they can toll them and remove them from federal responsibility (Read more here.).

Texas is also the home of the highly controversial Trans Texas Corridor, frequently referred to as a NAFTA Superhighway until it became popular for the Bush Administration to deny their existence. This will be a 4,000 mile network of trade corridors to benefit multi-national corporations at the expense of Texas taxpayers, landowners, and commuters.

The New York Times owes it to its vast readership to find out what’s unfolding all across the country, especially in Texas where Bush and his sidekick Texas Governor Rick Perry have literally led us as lambs to the highway lobby slaughter. They recently cooked-up “market-based” tolling which allows the government to charge the highest possible tolls using their government-sanctioned highway monopolies. Read this excellent commentary by one Texas journalist, William Lutz, here.

Pennsylvania Political War Over Planned Tolls on I-80
By Sean Hamill
New York Times
August 26, 2007
BROOKVILLE, Pa., Aug. 23 — Anthony Foote spends a lot of time driving his Kenworth T-600 truck on Interstate 80 in Pennsylvania. He prefers it to the state’s other east-west highway, the Interstate 76 turnpike, which can cost him $140 in tolls. 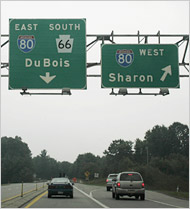 Traffic was heavy this week on I-80 in Pennsylvania. Some 21 million vehicles travel annually, 70 percent from out of state.

So the news that the state plans to impose tolls on I-80 was as upsetting to Mr. Foote as finding an ugly scratch in the purple paint on his rig.

“I hate paying tolls,” he said. “It eats up my profit. If this goes through, you’ll have a lot of truckers avoiding Pennsylvania — including me.”

Pennsylvania officials plan to build up to 10 toll areas along the 311-mile stretch of Interstate 80 in the next three years to help pay for road, bridge and mass transit projects and subsidies.

The move has sparked a political war between the bipartisan coalition of state legislators who approved the plan and two Republican congressmen who say it is a “shell game,” taking revenue from rural Pennsylvania to bail out the state’s urban areas.

“It’s absolutely horrendous for my district,” said one of them, Representative John E. Peterson, whose Fifth Congressional District covers about half of I-80 in north central Pennsylvania. “Every major bill like this should be measured by whether this will make people less likely to come here. And if this stays active, we’ll never get another distribution center or similar business again in my district.”

Paying for new roads with tolls, or adding tolls to sections of older urban roads, is common across the country. But experts say that imposing tolls on an entire interstate highway that had been free may be unprecedented, in part because the federal government typically bans tolls on highways paid for with federal money, as I-80 was.

“I haven’t heard of another one,” said Bernard Weinstein, director of the Center for Economic Development and Research at the University of North Texas, which has done a half dozen studies on the impact of toll roads. “But I think most states will eventually have to move to the user principle. Tolls are going to be the wave of the future.”

Pennsylvania’s plan is to generate about $950 million a year through the sale of bonds backed by tollway revenue and other state sources over the first 10 years, with about $500 million going to road and bridge projects throughout the state, and the remaining $450 million going to subsidize mass transit in Philadelphia, Pittsburgh and other cities.

State officials say that about 70 percent of the 21 million vehicles that travel I-80 annually are from out of state, and 40 percent are commercial trucks.

After the State Legislature and Gov. Edward G. Rendell, a Democrat, included the toll plan in their July budget deal, Mr. Peterson and Representative Phil English surprised state officials on July 24 by quietly slipping an amendment into the House’s version of the federal transportation bill to prevent it.

But hardly anyone outside of Mr. English and Mr. Peterson’s offices believe it will still be there after the House-Senate conference committee meets on the transportation bill. Pennsylvania’s senators, Bob Casey and Arlen Specter, have both said they do not want to interfere in the state’s decision-making and will not help the two congressmen.

Even so, Mr. English and Mr. Peterson are not giving up, and they believe they have public opinion, and federal law, on their side.

The plan requires the approval of the Federal Highway Administration, a process that state officials hope will be completed in a year. Under a program called the Interstate System Reconstruction and Rehabilitation Pilot Program, states can add tolls to interstates paid for with federal money.

“It will fly only if the Federal Highway Administration decides it will fly,” said Mr. English, whose Third Congressional District covers about 30 miles of the western edge of I-80. “And this plan doesn’t fit the pilot program as proposed by Congress.”

Mr. English argues that the pilot program was intended to let states use new toll revenue for road maintenance and improvements, not mass transit.

But Joseph G. Brimmeier, chief executive for the Pennsylvania Turnpike Commission, said he was confident Pennsylvania’s program would pass muster.

“We put together a package that helps solve the funding crisis in Pennsylvania for the next 50 years,” he said. “It solves the crisis without raising one cent of taxes. And here we are four weeks into this debate, and I don’t hear any plans from them to help solve these problems.”

Both Mr. English and Mr. Peterson said they liked the financing idea that Governor Rendell first proposed: leasing Interstate 76 to a private company to generate revenue. But state officials could not garner support for it, and the tolling plan, which includes raising rates on the rest of the existing tollway system as well, was approved instead.

Mr. Brimmeier said what upsets him the most about the representative’s efforts is that they “try to pit one part of Pennsylvania against another.”

When asked about the toll plan, many drivers on I-80 sounded resigned.

“I’d have to pay it, and I’d still go on 80, but I wouldn’t be happy about it,” said Dawn Toporcer, a fourth-grade teacher from Lordstown, Ohio, who was shopping with her two daughters for school at the Prime Outlets at Grove City, a regional outlet mall on Interstate 79, about three miles south of I-80.

Grove City was specifically chosen as the site for the mall 15 years ago because of its location near the intersection of the two interstates, said Michelle Czerwinski, a mall spokeswoman. The mall attracts millions of customers who get there by traveling I-80, and imposing tolls on the highway would hurt, she said.

“It’s just going to be a negative,” Ms. Czerwinski said. “Any kind of toll plan would slow down the traffic.”