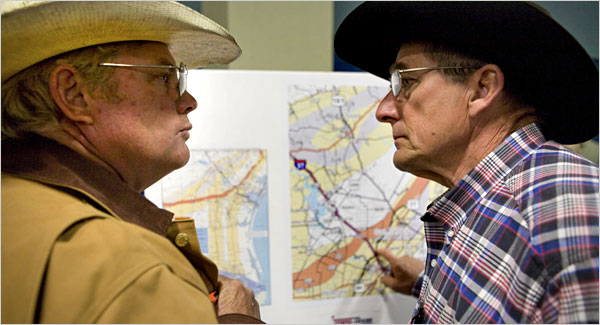 Leon Little, right, and Dean Nesloney attended a meeting last week in Robstown, Tex., on the Trans-Texas Corridor project, which could cut through their land.

Proposal in Texas for a Public-Private Toll Road System Raises an Outcry
By RALPH BLUMENTHAL
New York Times
February 10, 2008
ROBSTOWN, Tex. — Leon Little’s farm here near Corpus Christi would not be seized for Texas’s proposed $184-billion-plus superhighway project for 5 or 10 years, if ever. 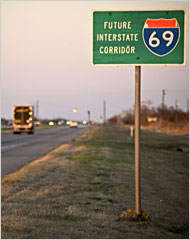 Near Victoria, Tex., a sign announces the coming of Interstate 69, which is now listed as part of a major state highway project.

But Mr. Little was alarmed enough to show up Wednesday night with hundreds of his South Texas coastal neighbors to do what the Texas Department of Transportation has been urging: “Go ahead, don’t hold back.”

Don’t worry. Texans have gotten the message, swamping hearings and town meetings across the state to grill and often excoriate agency officials about a colossal traffic makeover known as the Trans-Texas Corridor, a public-private partnership unrivaled in the state’s — or probably any state’s — history, that would stretch well into the century and, if completed in full, end up costing around $200 billion.

“Is your road more important than the foodstuffs we put together for you?” asked Mr. Little, glaring at transportation officials at the town meeting.

The plan envisions a 4,000-mile network of new toll roads, with car and truck lanes, rail lines, and pipeline and utilities zones, to bypass congested cities and speed freight to and from Mexico.

Critics abound, but experts say Texas is addressing a problem certain to worsen nationally in coming decades: the price of gasoline may be rising but revenue from gasoline taxes is not, and with the rise of more fuel-efficient vehicles, less money is being raised for highway projects, even as traffic grows.

So transportation planners are increasingly looking to the private sector to put up construction money for toll roads in return for revenue from motorists.

“We’re relying on 1993 income for 2008 output,” said Robert Harrison, deputy director of the Center for Transportation Research at the University of Texas in Austin. “It’s unsustainable.”

Texas has been a victim of its own success, officials say. From July 2006 to July 2007 it added more people than any other state — nearly half a million, beating California by nearly 200,000. In the past quarter century, they say, the state’s population has grown by nearly 60 percent while road use has doubled.

“They make fun of us, but a whole bunch of people want to be Texans,” said Phillip E. Russell, assistant executive director of the Texas Transportation Department, who presided over the meeting here at the Nueces County Fairgrounds, along with the agency’s executive director, Amadeo Saenz.

Mr. Saenz said that Texas highways averaged 46 years of age and that the state was running out of money to maintain them, let alone build new roads. “The problem is our needs far outweigh the money available,” he said.

At particular issue in South Texas is a stretch of federal Highways 77 and 59 designated part of a proposed new segment of the federal highway system, I-69. But what was to have been a new interstate long sought by some businessmen and local officials is now listed as TTC-69, or part of the Trans-Texas Corridor.

“I don’t think people realize it has morphed into a toll road,” said Linda Stall, founder of a opposition group called Corridor Watch. Ms. Stall said the project was backed by “the guys who build, financiers and the suits.”

“The only person who loses is the citizen,” she said. “We’re paying everyone’s profit.” She also said investors would “cherry pick” the most lucrative toll routes, leaving other sections unfinanced.

Mr. Saenz said some routes might not require bypassing. “The no-build alternative is still an alternative,” he said.

The corridor project grew out of the 2002 governor’s race when Rick Perry, the former Republican lieutenant governor who had completed George W. Bush’s unfinished term, surprised transportation experts by taking ideas they had discussed a decade earlier, to little interest, and “supersizing them,” as one recalled.

The project grew to consist of four “priority segments:” new multimodal toll roads up to 1,200 feet wide paralleling Interstates 35 and 37 from Denison in North Texas to the Rio Grande Valley; a proposed I-69 from Texarkana to Houston and Laredo; I-45 from Dallas-Fort Worth to Houston; and I-10 from El Paso to Orange on the Louisiana border. But the exact routes are years away from being designated.

With construction, land acquisition and other expenses, the cost was estimated in 2002 at up to $183.5 billion, all of it to be put up by private investors, state officials say. No existing roads would gain tolls.

The first planning contract, for a segment paralleling I-35, was awarded in 2004 to a partnership of Cintra, a publicly traded transportation giant based in Madrid, and the Zachary Construction Corporation of San Antonio. But lawmakers, concerned over the public outcry, put the brakes on additional contracts until next year.

Legislators also asked transportation officials last week to explain why they were complaining of budget shortfalls while failing to use $9 billion in voter-approved bonding authority.

Now that 12 town meetings have concluded and the agency this month began the first of 46 public hearings to run through next month, Mr. Saenz said, “We have now gotten to first base.”

Once the Federal Highway Administration signed off on the plans, he said, the agency, perhaps next year, could begin a second phase of four to six years to select actual routes. But meanwhile, people here complained, they were being left hanging.

“Six to 15 years puts us in limbo forever,” said John Floyd, whose antiques shop is the only business in San Patricio, a historic crossroads dating from 1828 and on the map as a possible corridor route.

David Helpenstell, himself a soon-to-retire employee of the transportation department, also felt threatened. “Your proposed alternate passes through the middle of my house,” he said. Now even if he wanted to sell, he said, “nobody would buy it.”

At least Texas could share the road wealth, said John Coggin of Bluntzer, suggesting that displaced landowners get a percentage of toll revenues, just as they would for mineral rights.

On his nearby farm, where he was turning over the soil for sunflowers, Dean Nesloney climbed out of his tractor to show where he feared TTC-69 could go. “It’s kind of like this,” Mr. Nesloney said extending his arms diagonally across his field.

“They’d probably take it all up,” he said. “Maybe leave me some little bitty corners.”