For anyone who still thinks toll roads don’t impact private property rights, think again. Here’s proof positive that an unnecessarily wide road expansion comes into play whenever TxDOT plans to toll existing roads. It must leave as many non-toll lanes as exist before the reconstruction. So most toll roads being done in Texas today require much larger footprints than would otherwise be necessary. Also, these toll lanes are largely underutilized (for “managed lane” projects only about 8% of the traffic can afford to pay the extra tax to access the new lanes). So this is a BIG price to pay for a project that won’t even provide congestion relief for the vast majority of commuters. 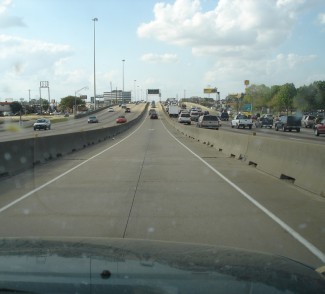 The Texas Department of Transportation (TXDOT) has released the Final Environmental Impact Statement (FEIS) for a proposed project to add traffic lanes to the 290 corridor and fix the 610 / 290 / I-10 interchange.

Four of the additional lanes would be part of a new managed lane facility along the existing Hempstead Highway that would have variable toll pricing for private vehicles as well as HOV and METRO use, replacing the existing HOV lanes in the middle of 290.

The project identifies and preserves land for future transit use, but does not include implementation or specifics on technology or potential stops for transit. Construction could begin in 2011 and the total expected cost of the project is $4.65 billion.

The public now has the opportunity to comment on this proposed project.

The FEIS Notice of Availability Press Release states that TXDOT expected for the notice to appear in the Federal Register on April 16, 2010.  The Notice of Availability states “The FEIS wait period ends May 17, 2010.  Comments regarding the FEIS should be submitted to the Director of Project Development at the Texas Department of Transportation’s Houston District Office located at 7600 Washington Avenue, Houston, Texas prior to 5:00 p.m. on May 17, 2010.  The Texas Department of Transportation’s mailing address is P.O. Box 1386, Houston, Texas, 77251-1386.”

TXDOT states that the project will require the use of eminent domain to take 366 properties to acquire right-of-way, including two churches: Celebration Lutheran Church at 15815 House Hahl Road and Christian Family Church at 14406 Hempstead Road (no apparent website). Appendix D of the FEIS identifies churches, community groups, and civic associations in the area that were contacted and provided information to publish to their constituents on the proposed project. Neither of the churches proposed for eminent domain appear on the list.The proposed eminent domain needs will include 360 residences, including both single and multi-family, and 392 businesses, some of which are listed as multiple businesses on one property.

The Indirect and Cumulative Impacts section of the FEIS states that 413 acres of prime farmland would be converted directly for ROW use, although that information does not appear on Form NRCS-CPA-106, Farmland Conversion Impact Rating for Corridor Type Projects. This form is presented as Appendix A, although it appears incomplete. This form is a consequence of the Farmland Protection Policy Act, which seeks to avoid adverse impacts on American farmlands as a consequence of federal programs, including road projects funded by the Federal Highway Administration. The FEIS does not appear to give an estimate of the amount of prime farmland that will be lost as a result of indirect impacts of the road project, however it states that TXDOT expects that 5,000 to 7,500 acres of additional development will occur in the study area as a result of induced demand from increased lane capacity in the corridor.

TXDOT explains that induced development does not occur because increased highway capacity brings new development to the Houston region, but instead that TXDOT’s decision will allocate development to this area of the region as opposed to other areas.  Referring to a study by the Urban Land Institute, the FEIS notes in section 6.1.2 that “Regional development is primarily driven by regional economics and the major effect of highways is the distribution of development within a region. (FHWA 2004a; Cervero 2003; Hartgen 2003a and 2003b).”  TXDOT notes that the study area currently houses 184,000 acres of undeveloped land, approximately 130,000 acres that is used for pasture and farming, 14,000 of which is cultivated farmland.

TXDOT describes the area surrounding 290 as such: “The transportation network is discontinuous with self-contained, isolated developments with very little interconnectivity of the roadway network.” The proposed addition of freeway lanes will not address this issue. TXDOT instead states that the City of Houston Mayor Thoroughfare and Freeway Plan will be used at a later time to add major thoroughfares “to be designed and built as development occurs.” TXDOT continues: “Thoroughfares are built as development happens, leaving gaps between communities. Bikeways and sidewalks are discontinuous, existing only as part of individual residential developments or isolated public projects along bayous or parks.”

TXDOT summarizes the major changes between the Draft Environmental Impact Statement and the FEIS as such:

The Preferred alternative has the same general configuration as the Recommended alternative, with some changes in the number of proposed main lanes on US 290: 12 lanes from West 34th Street to Pinemont Drive (revised from 10 lanes), 12 lanes from FM 529 to Eldridge Parkway (revised from 10 lanes), and 10 lanes from Eldridge Parkway to Telge Road (revised from eight lanes).  Some direct connector and access ramp modifications were also revised.  The other major change in the Preferred alternative is the relocation of the transit reserve from north of the managed lanes along Hempstead Road to between the managed lanes and the UP railroad from IH 610 to BW 8.

The stated purposes of the US 290 Corridor projects are:

Reduce congestion in the US 290 corridor within Harris County,
Improve LOS and mobility on US 290 and Hempstead Road,
Bring the roadway facilities up to current design standards, and
Improve safety in the US 290 Corridor.

Main My290 project website
Full US 290 FEIS Report (link is to a webpage with a series of pdf’s)
Executive Summary
Section 6 – Indirect and Cumulative Impacts
Appendix A – Farmland Conversion Impact Rating for Corridor Type Projects
Section 1 – Need for and Purpose of Proposed Action
Public Comment and Response Report (This document includes written responses to the DEIS, transcripts from public meetings, and an attempt by TXDOT to respond to every issue raised in a manner that groups public comments into a series of questions)