Pennsylvania: Lawmakers Line Up Against Tolling Interstate Freeway
Bipartisan group of federal and state representatives from Pennsylvania lobby against plan to toll Interstate 80.
The Newspaper.com
12/22/09 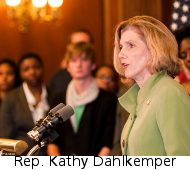 Federal and state lawmakers banded together last week in an attempt to block the Federal Highway Administration (FHWA) from allowing the state of Pennsylvania to turn Interstate 80 from a freeway into a 311-mile toll road. A delegation of lawmakers met Thursday with FHWA officials urging them to reject the recently refiled application to toll this vital commercial link between New York and Chicago.

“The proposal to toll I-80 must be stopped,” US Representative Kathy Dahlkemper (D-Erie) said in a statement. “It will harm businesses and communities in Western Pennsylvania at a time when we should be doing everything in our power to accelerate economic recovery, not stall it. I am pleased to work alongside my colleagues in the House and with local leaders in Pennsylvania to try to put the brakes on this dangerous tolling plan.”

Eleven state representatives and two state senators, mostly Republicans, arrived in Washington from Harrisburg to join the lobbying effort. State Representative Scott Hutchison (R-Venango), for example, argued that his area’s only economic growth has come from companies that depend on the free commerce brought by I-80.

“If you take that away, we have almost nothing,” Hutchison said.

“I am, and always have been, opposed to tolling on I-80, as it would negatively affect residents throughout Pennsylvania, but especially those in the Northeast,” Kanjorski said. “We must invest in projects and policies that will benefit Pennsylvanians, and tolling on I-80 will do just the opposite. Because of my constituents’ overwhelming opposition to tolling, today we spoke directly with the Federal Highway Administration and urged them to deny the state’s application to place tolls on I-80. I will oppose any effort that so clearly discriminates against Northeastern Pennsylvania, as tolling on I-80 does.”

On the Republican side of the aisle, Congressman Glenn GT Thompson (R-Howard) has led the federal efforts to stop Governor Edward G. Rendell (D) from imposing tolls on I-80.

“The economic devastation that could result from the tolling of I-80 has been obvious since it was first proposed,” Thompson said. “It was good to have members of the Pennsylvania legislature join us here to meet with the Federal Highway Administration and let them know the strength of the opposition to the Pennsylvania Turnpike’s funding scheme.”