Link to article here. The key buzz word for these taxpayer rip-offs is “innovative.” It’s important to note Rick Perry calls public private partnerships (PPPs) “innovative financing,” too. His new name for the Trans Texas Corridor is “Innovative Connectivity Plan.” The common theme is these things are being pushed by corporations who stand to profit handsomely off these deals (if the traffic materializes), so all the terminology is the same. Trust me, politicians aren’t smart enough to come up with stuff on their own… 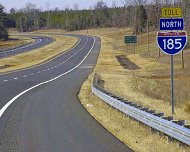 The first public-private partnership toll road established as a not-for-profit corporation has gone bust. The Connector 2000 Association, which operates a sixteen-mile, four-lane toll road linking Interstates 85 and 385 in southern Greenville County, South Carolina, announced last week that it was in default on its financial obligations.

“Traffic on the Southern Connector was inadequate to permit the association to collect sufficient toll revenues to pay debt service on the bonds which came due January 1, 2010,” a Connector 2000 Association statement explained. “The association has been advised that the trustee has made no payment of any such debt service. An event of default currently exists… The association is actively negotiating the restructuring of its bonded indebtedness with the trustee, the South Carolina Department of Transportation (SCDOT), and certain owners of large blocks of the bonds.”

In 1998, the association floated $200,177,680 in tax-free bonds to fund construction of the toll road that opened in 2001. These bonds were to be repaid over thirty-five years with the proceeds from toll collections. Just a few years ago, SCDOT touted this project as a prime example of the department’s “innovative financing successes.”

“Without innovative financing, this southern loop around the city of Greenville would be nothing more than a dream,” a SCDOT brochure boasted.

Like other highly-leveraged tolling efforts, the Connector was hampered by unrealistic traffic projections and rosy financial scenarios for an area expected to experience an economic boom.

“The expected growth in the region has yet to materialize,” the toll road’s 2008 annual report admitted. “This factor, the recession and consumer resistance to the payment of tolls (the Southern Connector Toll Road is the only toll road in Upstate South Carolina) have all contributed to the lower-than-forecasted traffic demands.”

There is little hope for the road’s recovery. In 2009, the association collected $3.9 million in tolls from motorists. Because SCDOT decided not to make the Connector a freeway, the majority of that revenue was swallowed by $2.8 million in expenses for things such as consultant fees, marketing, toll collection employees and legal fees — most of which would not be required if operated as a free road. With such a constrained cash flow, the road could not come close to meeting its $13.1 million annual bond interest obligation. The toll road’s bond payments had been insufficient since 2004, and now the association’s net deficit stands at $169 million.

As a result, Standard and Poor’s downgraded the toll road’s bonds from C- to the lowest possible rating of D. A copy of the road’s latest financial statement is available in a 600k PDF file at the source link below.