AUSTIN — The Cintra-Zachry consortium has upped its ante on the Trans Texas Corridor, offering Wednesday to develop high-speed freight rail tracks in addition to its standing proposal to build toll lanes for the massive project envisioned by Gov. Rick Perry.

The 600-mile line from Mexico to Oklahoma would be the most miles of railroad track put down in Texas since the early 1900s.

The line could pull a million trucks a year off Interstate 35 with the promise of cutting cross-state trips on rail by up to two hours, Cintra-Zachry said in a letter to the Texas Transportation Commission.

Officials believe railroads would be willing to pay for faster speeds, move some of their hazardous cargo off tracks in urban areas and possibly free up lines for passenger rail, such as a San Antonio-Austin commuter service.

“This confirms Gov. Perry’s vision that once our mobility challenges were open to innovation, the market would respond,” Texas Transportation Commission Chairman Ric Williamson said at a news conference announcing Cintra’s proposal.

The rail line is a major piece of the Trans Texas Corridor puzzle, a 4,000-mile network of toll lanes, freight and passenger rail lines, and utility lines crisscrossing the state. Perry proposed the corridor four years ago.

Cintra-Zachry, which won a bid to develop plans for the corridor segment paralleling I-35, offered to build a toll road from San Antonio to Dallas and pay $1.2 billion to collect fees from it for up to 50 years.

The proposed rail line, which likely would be double-tracked and designed for double- and triple-stacked containers going 70 mph, could cost up to $6 billion to build, Texas Transportation Commissioner Ted Houghton said. Tracks would be separated from roads by bridges and underpasses.

The line could be a magnet to handle trade to and from Mexico and China and could be a boost for Texas ports such as KellyUSA, Houghton said.

“The opportunities we have are absolutely enormous,” he said. “It should have been built years ago.”

Construction could start in two or three years, probably beginning with a project to solve congestion in Fort Worth. Nobody took at stab at how long it would take to get anything completed.

Spain-based Cintra and San Antonio partner Zachry Construction Corp. expect to finance the line through charges to shippers but might ask for money from the Texas Rail Relocation Fund or federal and state programs.

If public funds are sought, the state will want concessions such as use of the tracks for passenger rail or allowing a third track with passenger train speeds of 120 mph or more, Transportation Commission chairman Williamson said.

“Passenger rail in this country is only affordable if you can do it in conjunction with the construction of other assets,” he said.

“Whether it is a foreign company running our roads, our rails or operating our ports, it’s wrong,” she said in a statement. “This deal just adds to the land grab.”

San Antonio officials say new tracks could remove many of the 70 trains going through the city every day, but they don’t know how Cintra-Zachry’s proposal might work.

Bruce Flohr, president of the Bexar County Rail District and chairman of a rail relocation study, said similar ideas have been discussed in other states, though not for a project this big, and none ever was implemented.

“Lots of details,” Flohr said. “Most of the times these things fall apart, primarily on the fees being charged.”

And the players that need to be on board to make it happen, large railroads such as Union Pacific and BNSF Railway Co., hadn’t heard of the track proposal until Wednesday, spokesmen said.

UP and BNSF signed an agreement with Perry last year that called for sharing costs of relocating rail traffic around cities.

“We’re just trying to figure out how this will fit into that agreement,” UP spokesman Joe Arbona said. 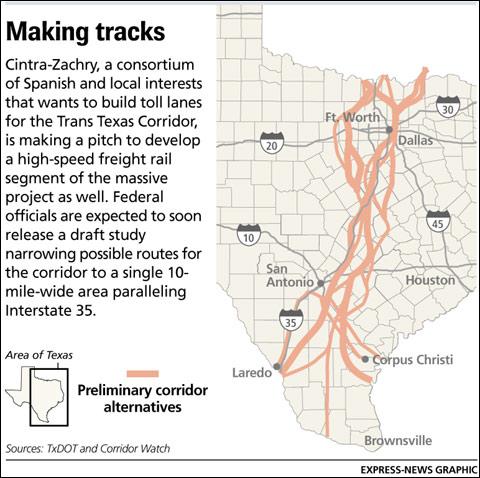