US DOT Misreports Gasoline Tax Revenue
Motor fuel excise tax revenue was up $185 million in 2008, not down, contrary to US Department of Transportation claims.
December 23, 2008
The Newspaper.com 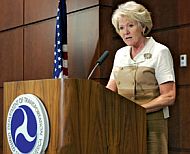 The US Department of Transportation (US DOT) has falsely suggested that the nationwide drop in vehicle miles traveled is endangering the revenue source used to maintain America’s highway network. Soaring gasoline prices in the summer and the ongoing recession together forced motorists to cut back substantially on travel, resulting in 100 billion fewer miles being driven in fiscal 2008. Transportation officials seized upon these facts to argue that the gas tax is unsustainable and that the country must quickly shift to tolling to save the highway trust fund.

“As driving decreases and vehicle fuel efficiency continues to improve, the long term viability of the Highway Trust Fund grows weaker,” Transportation Secretary Mary Peters said in a December 12 statement. “The fact that the trend persists even as gas prices are dropping confirms that America’s travel habits are fundamentally changing. The way we finance America’s transportation network must also change to address this new reality, because banking on the gas tax is no longer a sustainable option.”

The federal Highway Trust Fund took in $3 billion less in revenue in fiscal 2008 than it did in 2007, and Federal Highway Administrator Tom Madison placed the blame squarely on the gas tax.

“This (drop in revenue) underscores the need to change our policy so American infrastructure is less dependent on the amount of gas American drivers consume,” Madison said.

The American Road and Transportation Builders Association (ARTBA) crunched the numbers and found this assertion to be entirely untrue. In fiscal 2007, the US Treasury reported that a total of $29.4 billion was collected from the taxes on gasoline and diesel fuel. In 2008, the total figure grew by $185 million to $29.6 billion. Lower traffic volumes did cause gasoline tax revenue to drop $70 million, but this figure was more than offset by a $256 million increase in revenue from the tax on diesel, which is primarily paid by the commercial trucking industry. View revenue chart.

These truckers, hit by tough economic times, cut expenses significantly. Sales of new rigs plunged in 2008. That caused a $2.4 billion drop in revenue from the 12 percent tax on the retail sales of trucks and trailers. An accounting change in the way kerosene and similar taxes were transferred ended up showed a paper loss of $722 million from the fund. Together these factors, which are unrelated to the number of vehicle miles traveled (VMT) in 2008, accounted for the $3 billion drop in trust fund revenue.

TheNewspaper has previously reported that gas tax revenues have not plunged at the state level. In Virginia, for example, fuel tax revenues were up 2.6 percent in fiscal 2008 (more). Motor carrier fuel tax receipts likewise increased in Illinois (more). At the same time, overall traffic has plunged on toll roads forcing huge increases in the tolling rates to prevent a loss in profit for private investors (more).