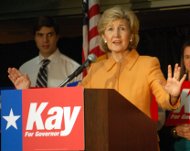 The US Senate on Thursday voted to renew a prohibition on the tolling of existing freeways in the state of Texas. The measure was adopted as part of a larger $123 billion transportation appropriations bill for fiscal year 2010, which passed the House in July.

“None of the funds made available… by this act shall be used to approve or otherwise authorize the imposition of any toll on any segment of highway located on the federal-aid system in the state of Texas,” HR 3288 states.

The ban is not complete. It includes exceptions for new construction, continued tolling on existing toll roads as well as the conversion of High Occupancy Vehicle (HOV) lanes into High Occupancy Toll (HOT) lanes. Under congressional rules, funding prohibitions placed on appropriations bills must be renewed every two years. The toll road ban was last enacted in 2007.

Because the provision was championed by Texas Senator Kay Bailey Hutchison, the issue has taken on a sharper political angle. Hutchison is looking to snatch away the Republican nomination from Governor Rick Perry, feeding on public opposition to tolling. Perry’s campaign took shots at Hutchison for attempting to thwart the governor’s plans to toll existing freeways and for inserting earmarks for state transportation projects into the bill. Hutchison’s campaign fired back.

“Once again, Rick Perry is putting political gamesmanship above the needs of Texas,” Hutchison’s campaign responded. “Hutchison voted to ban toll roads and the double taxation of Texans on federally funded roads. This vote also increases the amount of federal tax dollars that come back to Texas for transportation needs, including much needed money to relieve traffic congestion.”

Differences between the House and Senate versions of the bill must be worked out before it is sent to the president. Both chambers approved the anti-tolling measure.

Sec. 125. (a) In General- Except as provided in subsection (b), none of the funds made available, limited, or otherwise affected by this Act shall be used to approve or otherwise authorize the imposition of any toll on any segment of highway located on the Federal-aid system in the State of Texas that–

(1) as of the date of enactment of this Act, is not tolled;

(2) is constructed with Federal assistance provided under title 23, United States Code; and

(3) is in actual operation as of the date of enactment of this Act.

(1) NUMBER OF TOLL LANES- Subsection (a) shall not apply to any segment of highway on the Federal-aid system described in that subsection that, as of the date on which a toll is imposed on the segment, will have the same number of non-toll lanes as were in existence prior to that date.

(2) HIGH-OCCUPANCY VEHICLE LANES- A high-occupancy vehicle lane that is converted to a toll lane shall not be subject to this section, and shall not be considered to be a non-toll lane for purposes of determining whether a highway will have fewer non-toll lanes than prior to the date of imposition of the toll, if–

(B) each high-occupancy vehicle lane that was converted to a toll lane was constructed as a temporary lane to be replaced by a toll lane under a plan approved by the appropriate county, town, municipal or other local government entity, or public toll road or transit authority.