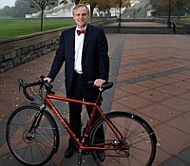 A Member of Congress proposes to use taxpayer money to fund the development of technology to track motorists as part of a new form of taxation. US Representative Earl Blumenauer (D-Oregon) introduced H.R. 3311 earlier this year to appropriate $154,500,000 for research and study into the transition to a per-mile vehicle tax system.

The “Road User Fee Pilot Project” would be administered by the US Treasury Department. This agency in turn would issue millions in taxpayer-backed grants to well-connected commercial manufacturers of tolling equipment to help develop the required technology. Within eighteen months of the measure’s passage, the department would file an initial report outlining the best methods for adopting the new federal transportation tax.

“Oregon has successfully tested a Vehicle Miles Traveled (VMT) fee, and it is time to expand and test the VMT program across the country,” Blumenauer said in a statement on the bill’s introduction. “A VMT system can better assess fees based on use of our roads and bridges, as well as during times of peak congestion, than a fee based on fuel consumption. It is time to get creative and find smart ways to rebuild and renew America’s deteriorating infrastructure.”

In 2006, the Oregon Department of Transportation completed its own study of how to collect revenue from motorists with a new form of tax that, like the existing fuel excise tax, imposes a greater charge on drivers the more that they drive. The pilot project’s final report summed up the need for a VMT tax.

“Unfortunately, there is a growing perception among members of the public and legislators that fuel taxes have little to do with road programs and therefore should be considered ‘just another form of taxation,'” the March 2006 report stated. “By itself, this situation appears to be preventing any increases in fuel tax rates from being put into effect.”

The money diverted from the fuel excise tax on non-road related projects must be made up for with a brand new VMT tax, the report argued. Merely indexing the gas tax to inflation or improvements in fleet gas mileage was rejected as “imprecise.” Instead, the report urged a mandate for all drivers to install GPS tracking devices that would report driving habits to roadside Radio Frequency Identification (RFID) scanning devices.

Blumenauer is a long-time advocate of bicycling and mass transit in Congress. Many of his largest campaign donors stand to benefit from his newly introduced legislation. Honeywell International, for example, is a major manufacturer RFID equipment. The company also happens to be the second biggest contributor in the current cycle to Blumenauer’s Political Action Committee (PAC), the Committee for a Livable Future. Another top-ten donor, Accenture, is a specialist in the video tolling field.

H.R. 3311 awaits a hearing in the House Ways and Means Committee. A copy of the bill is available in a 170k PDF file at the source link below.

Permanent Link for this item