The front and back of “GRIDLOCK” flyer that the SA Texas Toll Party volunteers are handing out at US 281 to inform drivers that the road was already funded with tax dollars. Read the front page coverage. This citizen action takes place after TxDOT distributed “How much will you pay” toll surveys for gridlock afflicted drivers. Read about TxDOT’s efforts, they were apparently ready for double tax toll rage, as they handed out questionnaires at the intersection of an already funded highway. See pictures of one of OUR enthusiastic crews at work below. Also below, read our press release about the double tax tolls. 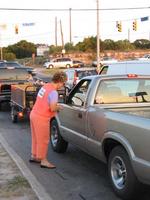 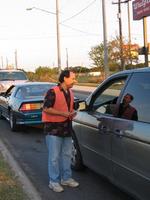 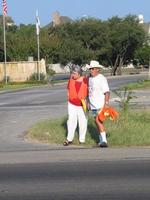 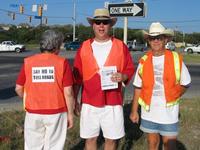 San Antonio, TX, September 27, 2005 – TexasTollParty.com is set to launch a PR blitz of its own to counter survey distribution by TxDOT asking people what they’re willing to pay for tolls.

WHO: Grassroots citizens through the Texas Toll Party.com
WHAT: Flier distribution blitz during rush hour traffic on 281
WHEN: Wednesday, September 28 @ 8:00 AM!
WHERE: US 281 at Evans Rd.
WHY: To give motorists the facts about TxDOT’s toll plan.

“What most folks don’t know is that they don’t need to pay tolls at all!” says Terri Hall, Director of the San Antonio Texas Toll Party.

“TxDOT has a FUNDED plan for the major improvements to US 281 north of Loop 1604, and it should already be under construction. But TxDOT threw that plan in the trashbin in order make us pay a toll to drive on a freeway we’ve already paid for and for improvements we’ve already paid for. We know and trust the taxpayers to get informed on this subject, and that once people are aware of the facts, they’ll help us work to fight this outrageous misuse of taxpayer money,” Hall remarks.

TxDOT has been failing to tell the public this key information and framing the debate as tolls or we get no improvements. When they’re taking EVERY freeway main lane on US 281 and leaving only frontage road as the free lanes, they ARE forcing people to pay a toll as well as converting an existing highway that’s already paid for into a tollway at a cost of nearly $2,000 a year for the average family (more if the toll rates are $.44-1.00 a mile like it was revealed in an independent review up in Austin).

The State’s gas tax revenue has increased steadily for the last 20 years. The Texas Department of Transportation (TxDOT) is big business. In fiscal year 2004, it took in $6.1 billion in taxes and fees. If it were a private corporation, it would rank 304th in the Fortune 500, ahead of companies like Southwest Airlines ($5.9B), Monsanto ($4.9B), and Starbucks ($4.1B). Unlike a private corporation which depends on attracting customers, TxDOT is a governmental monopoly without competition. “Last I checked, we pay gas tax and continue to pay gas tax every day. TxDOT takes in $6.1 billion a year.

If we can’t get our needed improvements with that kind of money when our federal interstate and our major state highway infrastructure is already built, then it’s our government who has a spending problem, rather than it being a problem of us being taxed too little,” Hall believes. “These guys are masters at making it appear as though the well has run dry, but the facts speak otherwise.” Many of these toll projects are already funded improvements; hence, there’s no need to toll them. Also, San Antonio sends away $100 million more EVERY YEAR in gas taxes than we receive back. That’s the exact dollar figure TxDOT says we’re in the negative every year.

“It’s not rocket science. Our legislators need to be getting the money we’re already taxed back in San Antonio before they suffocate us with a lifetime of tolls,” Hall declares, “especially when it costs more to build and maintain toll roads than to build them as free roads. This is whole thing smacks of fiscal mismanagement. Why on earth would we spend more to build toll roads only a few can use versus build them as free roads at less cost that EVERYONE can use?”

Tolls are a sloppy tax where most of the money goes into collecting the tolls, and in this case when using a public-private agreement (known as CDA agreement), goes to line the pockets of a private corporation for up to 50 years.